Average retail petrol prices in 2020–21 in Australia’s 5 largest cities were the lowest in 22 years in real inflation adjusted terms, according to the ACCC’s latest petrol monitoring report released today.

The report looks at Australian petrol prices in the 2020–21 financial year and the June quarter 2021. 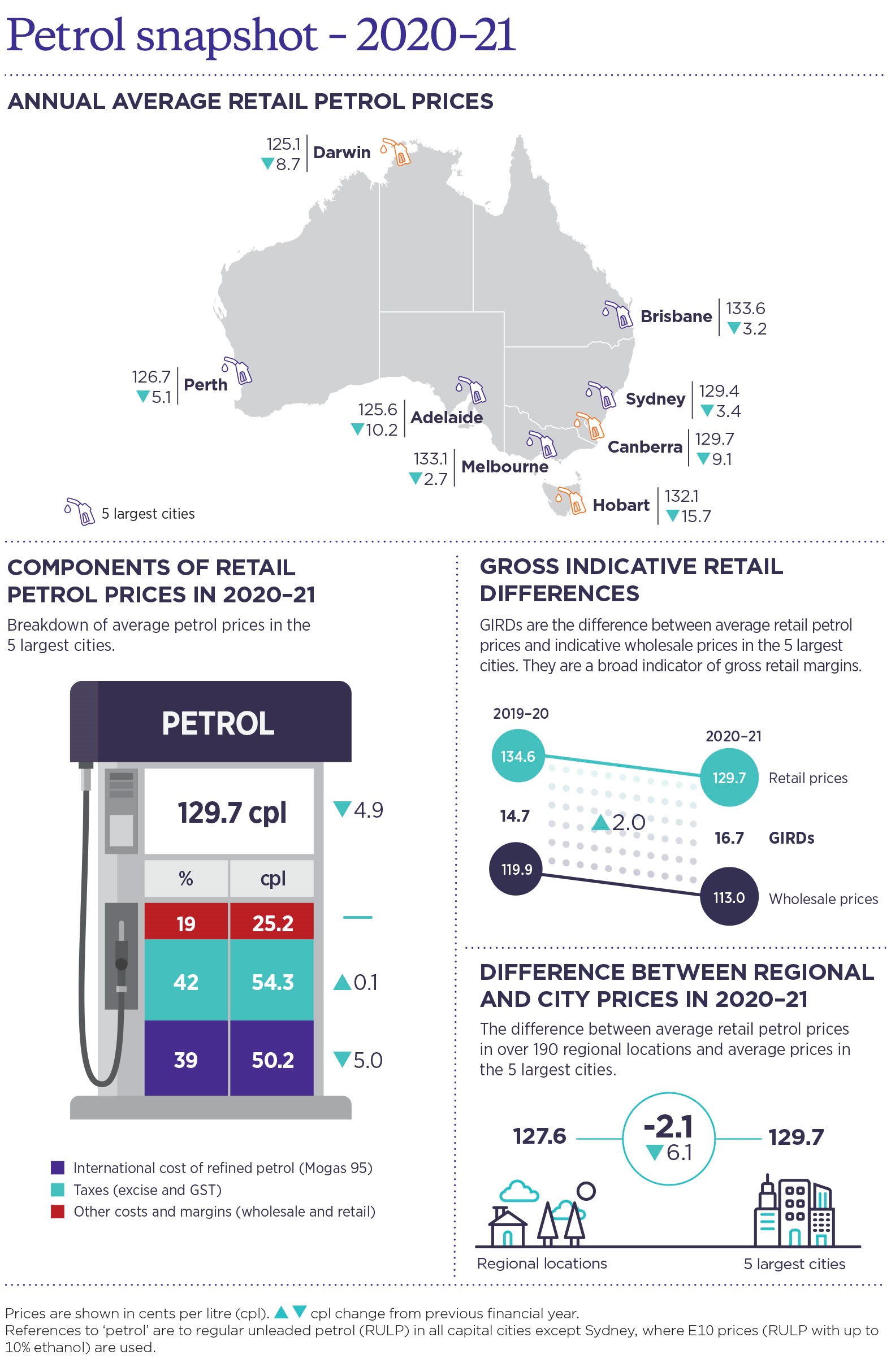 Petrol sales continue to be lower

The COVID-19 restrictions on travel and economic activity in Australia imposed in mid-March 2020 meant that there was significantly less petrol purchased from retail sites. In 2020–21, annual petrol sales volumes were around 11 per cent lower than in 2018–19, before the impact of COVID-19.

“The pandemic has had an enormous impact on demand for petrol in Australia, going back to March last year and this has influenced retail prices and gross retail margins,” Mr Sims said.

“While the June quarter 2021 results show only a relatively small drop in demand for petrol, millions of Australians have been in lockdown since the end of June 2021 and we will see the impact that’s had on fuel sales volumes in our September quarter 2021 report.”

“The production cuts agreed to by the OPEC cartel over the last 18 months have contributed to higher international crude oil and refined petrol prices in the first half of 2021,” Mr Sims said.

“Historically, regional Australians have paid more for petrol than motorists in the 5 largest cities, so 4 consecutive quarters of lower prices in the regions is significant,” Mr Sims said.

“Possible reasons for this include fewer lockdowns in the regions, and regional retail petrol prices reacting slower to international price increases as a result of lower volume turnover.”

Darwin had the lowest average prices among all of the capital cities, which was a significant turnaround from 2013–14 when prices in Darwin were over 19.0 cpl higher than those in the 5 largest cities.

“Consumers can make savings by shopping around, and we hope that the increased availability of government and commercial fuel price apps and websites is making people more aware of the range of prices available,” Mr Sims said.

“Petrol is a significant expense for many households and we urge Australian motorists to compare prices and give their business to retailers who are pricing more competitively.”

Some fuel price websites and apps are more comprehensive and timely than others. The government schemes are the most comprehensive and up-to-date, whereas the commercial apps and websites may not include all sites, which means that some of the lowest-priced sites are not listed.

However, in jurisdictions where the commercial services obtain their data via the government schemes, they can be as comprehensive and timely as the government websites and apps.

Source: ACCC calculations based on data from FUELtrac.

Note: The area to the right of the dotted vertical line represents 2020–21.

On 16 December 2019, the Treasurer issued a new Direction to the ACCC to monitor the prices, costs and profits relating to the supply of petroleum products in the petroleum industry in Australia and produce a report every quarter. This is the seventh quarterly petrol monitoring report under the new Direction.