Average petrol prices rose in the September quarter 2020 after a record low earlier in the year, but still remain well below the 15-year real average of 151.6 cents per litre (cpl).

The ACCC’s latest petrol monitoring report shows the average retail price for petrol in the September quarter across Sydney, Melbourne, Brisbane, Adelaide and Perth was 122.1 cpl, an increase of 13.1 cpl from the June quarter 2020.

Average petrol prices (seven-day rolling average) in the five largest cities have been very volatile over the last 12 months, ranging from a high of 159.1 cpl in December 2019 to a low of 92.4 cpl in April 2020. However, prices were steadier during the September quarter 2020 and stayed mostly between 129.0 cpl and 118.0 cpl.

“We saw some major fluctuations during the first six months of the pandemic but petrol prices stabilised in the September quarter,” ACCC Chair Rod Sims said.

Petrol sales volumes partially recovered in the September quarter 2020, although the increase in sales volumes was not uniform across all states and territories.

In the month of September, petrol sales volumes across Australia were 19 per cent lower than monthly average sales in 2019, influenced by a 44 per cent drop in Victoria because of the state’s COVID-19 restrictions.

Darwin continues to have cheaper fuel

Darwin had the lowest average retail petrol prices of the eight capital cities in the September quarter 2020 at 118.0 cpl, which is 4.1 cpl lower than average prices across the five largest cities.

Darwin’s relatively low prices in recent years may have been influenced by the opening of new retail sites that are vigorous competitors, and the introduction of the Northern Territory Government’s fuel price transparency scheme, MyFuel NT.

September was the second successive quarter in which taxes (44 per cent) accounted for a larger proportion of the total price of petrol than the refined petrol itself (34 per cent).

Mogas 95, which is the benchmark for refined regular unleaded petrol in the Asia-Pacific region, and taxes together accounted for 78 per cent of the average price of petrol in the September quarter. These components are largely outside the control of petrol retailers.

“The increase in the average retail price of petrol in our five largest cities was driven mainly by an increase in the price of Mogas 95, but it must be noted that petrol retailers’ gross margins are at record highs,” Mr Sims said.

“Petrol retailing is a high-volume low-margin business with fixed costs, so we understand that some businesses have had to increase their margins to offset sales volumes that were 17 per cent lower in the September quarter compared to last year’s average.”

In the September quarter 2020, average petrol prices in regional locations were lower than average prices in the five largest cities for the first time since the ACCC began quarterly reporting in 2015.

On 30 October 2020, BP announced that it would convert its Kwinana refinery in Western Australia to an import terminal because regional oversupply and sustained low refining margins had made it economically unviable.

Source:  ACCC calculations based on data from FUELtrac.

Note:  The area to the right of the dotted vertical line in this chart represents the September quarter 2020. 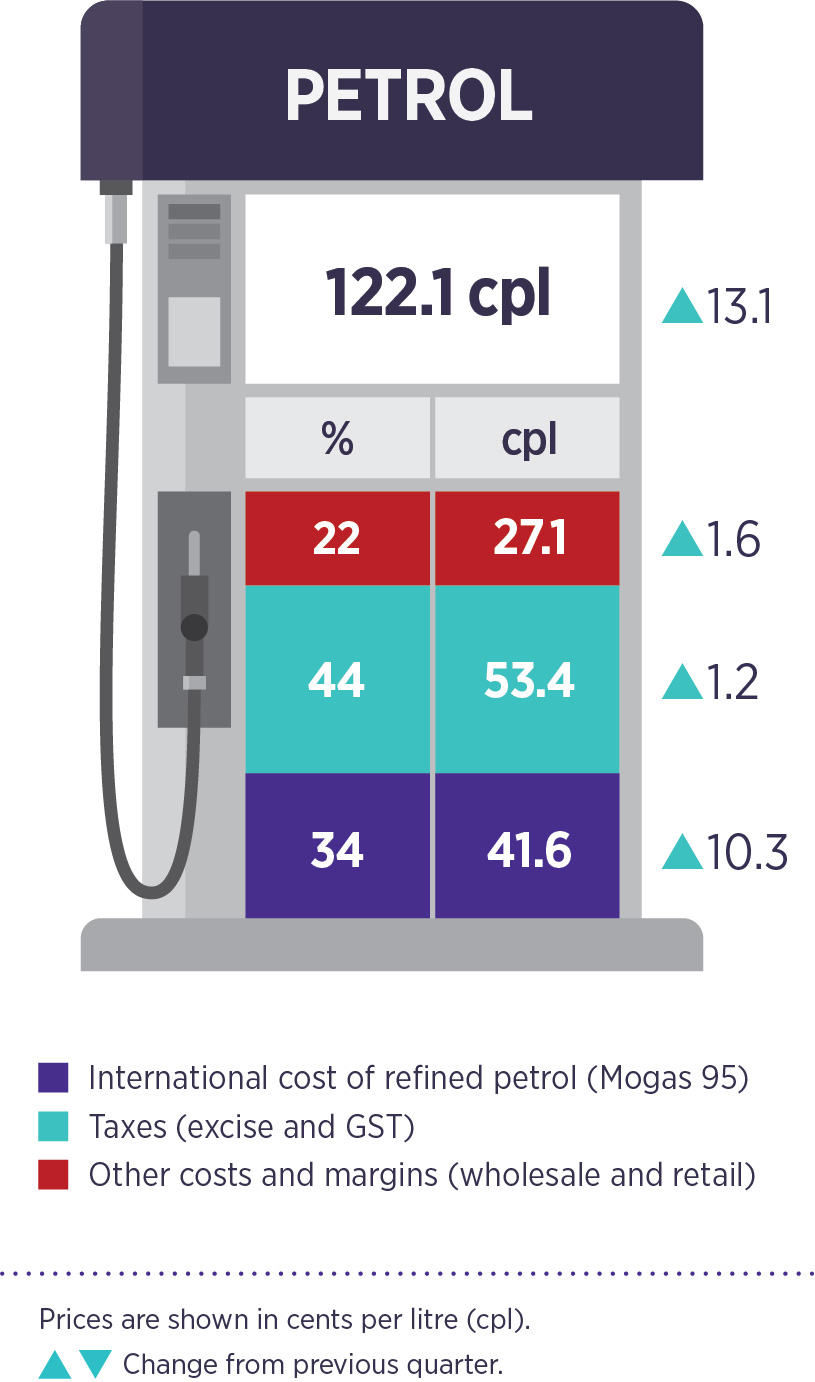 On 16 December 2019, the Treasurer issued a new direction to the ACCC to monitor the prices, costs and profits relating to the supply of petroleum products in the petroleum industry in Australia and produce a report every quarter. This is the fourth quarterly report under the new direction.