Alinta Energy (Alinta) has undertaken to compensate thousands of Victorians for making misleading electricity price comparisons which the ACCC considered were likely in breach of the Australian Consumer Law.

The ACCC was concerned that this comparison was misleading as it gave a false impression of Alinta’s electricity price reduction, which for standing tariff rates was 1.8 per cent, not 2.8 per cent as advertised.

“Alinta’s conduct prevented customers from making informed choices about which electricity retailer best suited their needs. Businesses must not mislead consumers in advertisements comparing their prices or services to those offered by competitors,” ACCC Acting Chair Delia Rickard said.

“Following ACCC action, Alinta will contact all affected Victorian customers to advise that they will honour the advertised price reduction for customers who wish to continue with their plan,” Ms Rickard said.

Alinta’s commitment to honour the 2.8 per cent tariff price reduction will be provided through credits backdated from 12 January 2018 until 11 July 2018, and also through adjusted rates which will apply from 12 July 2018 for the next 6 months.

Alinta has also implemented a review of its advertising processes and conducted refresher training in the Australian Consumer Law for relevant staff.

As a result of the ACCC’s investigation, Alinta acknowledged the ACCC’s concerns, immediately ceased the advertising campaign and has undertaken to compensate affected customers. 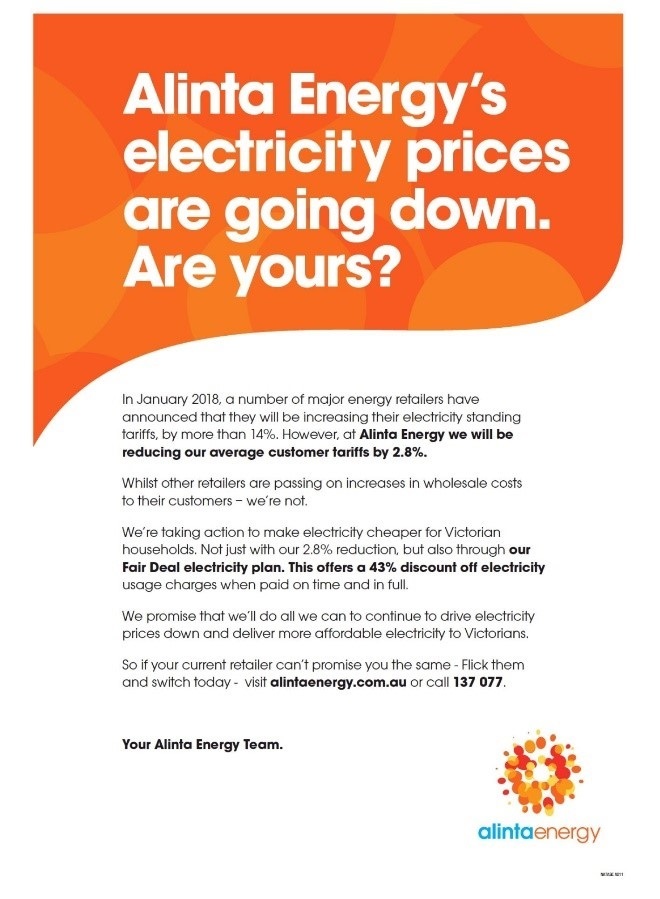