Australia’s four largest airports (Sydney, Melbourne, Brisbane and Perth) had a combined operating profit in 2020-21 that was only about five per cent of what it was in the last full financial year before the pandemic, the ACCC’s latest Airport Monitoring Report reveals.

The report also shows that the number of domestic and international passengers using the four airports in 2020-21 was between about 17 per cent and 40 per cent of their average pre-pandemic levels.

Yet, despite this, Sydney, Brisbane and Perth airports still recorded operating profits in 2020-21, although their margins fell sharply. Victoria’s longer periods with COVID travel restrictions contributed to an operating loss for Melbourne Airport in 2020-21.

“Despite severely reduced aeronautical revenues, Sydney, Brisbane and Perth airports were still able to turn a profit last financial year as a result of reduced operating costs. This is a surprising result given the impact of the pandemic on the aviation industry, and it demonstrates the resilience of the airports.”

Source: ACCC analysis of information received from monitored airports as part of the monitoring regime.

Source: ACCC analysis of information received from monitored airports as part of the monitoring regime.

The aviation industry plays a critical role in the Australian economy, and airports, as regional monopolies, have substantial market power. For these reasons, the ACCC will carefully monitor the airports’ profit margins as the industry recovers from the pandemic.

In February this year, the Supreme Court of Western Australia ruled that Perth Airport had likely exercised substantial market power in negotiating aeronautical charges with airlines in 2018.

The ACCC is not surprised by the court’s finding, and prior to the pandemic had raised concerns about the sustained high profit margins earned by Sydney, Melbourne, Brisbane and Perth airports.

“The Perth Airport and Qantas case, combined with our own findings over a long period, suggest the Government’s Aeronautical Pricing Principles are currently not assisting airlines in their negotiations with all airports as intended,” Ms Brakey said.

“We’ll consider what can be done to improve how the Aeronautical Pricing Principles operate in commercial negotiations.”

Retail chains operating at Sydney, Melbourne, Brisbane and Perth airports told the ACCC that their sales turnover in 2020-21 was only about five per cent of their pre-pandemic average. As a result, many retailers at the four airports had to close their operations.

Hire car operators at the four airports also told the ACCC that their revenues were between about 10 per cent and 50 per cent of pre-pandemic levels. Some of the hire car companies had to close their booths at airports and sell parts of their fleets to generate enough cashflow to continue.

All four airports provided various levels of financial support to commercial and property tenants in 2020-21, such as rent relief, rent deferral and waiving fixed payments. 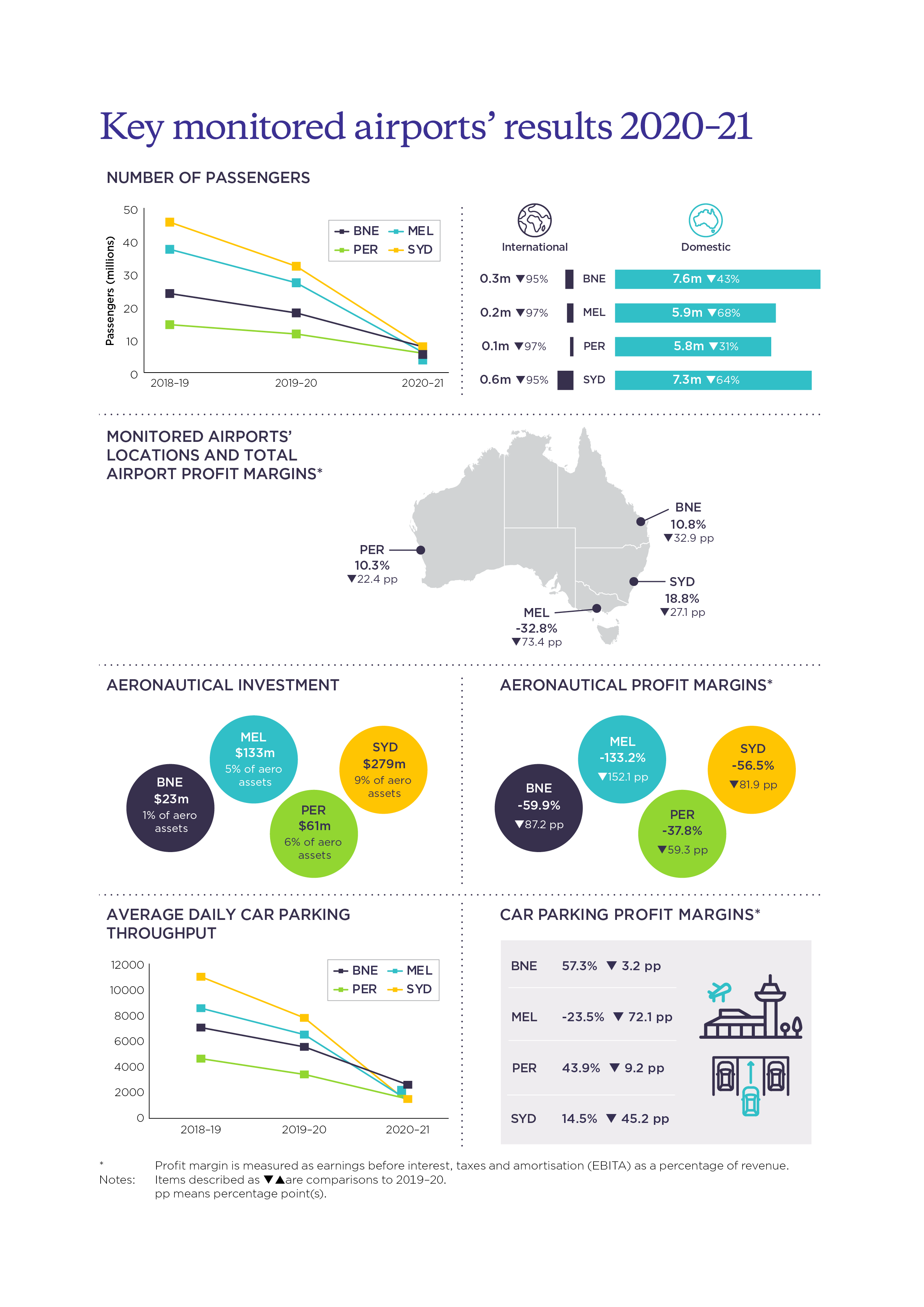 The ACCC monitors the performance of the four largest airports in relation to aeronautical and car parking activities, following a direction from the Australian government requiring it to consider prices, costs, profits and quality of service.

Price and quality comparisons between airports should be treated with some caution as terminal configurations and the mix of domestic/international passengers vary between airports. Likewise, airports may have different approaches to valuing their assets, making it difficult to meaningfully compare profitability between airports.