Telco provider Australian Private Networks Pty Ltd, trading as Activ8me, has paid a penalty of $12,600 after the ACCC issued an Infringement Notice for alleged false and misleading representations. It’s alleged Activ8me represented that its internet services were endorsed or approved by the ACCC as being superior to those offered by other providers, when this was not the case.

The ACCC’s logo was published in close proximity to both statements.

The NBN Wholesale Market report listed Activ8me as having the highest number of satellite services in operation but did not endorse or approve Activ8me over other providers.

“The ACCC does not endorse or approve particular businesses and it is imperative that consumers trust our name and logo when it is used,” ACCC Commissioner Sarah Court said.

“As soon as we became aware of the misuse of our report findings and logo, we contacted Activ8me and issued an Infringement Notice. Activ8me has since removed the representations.  This penalty serves as a warning to companies that we will act swiftly if they misrepresent the ACCC.” 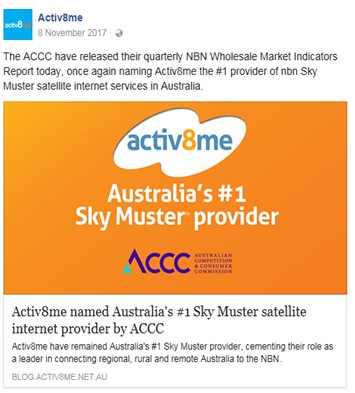 Activ8me is a Melbourne based retail service provider (RSP) of broadband internet and phone plans. As part of its offering, Activ8me provides NBN Sky Muster plans and has the most Sky Muster customers of the ten Sky Muster RSPs.

Sky Muster is a broadband internet service available only at premises not serviced by fixed line or fixed wireless technology, predominantly in regional and remote Australia. It is provided to customers by RSPs using NBN Co Ltd’s satellite technology.