Under direction from the Federal Government, the ACCC currently monitors fuel prices, costs and profits and reports on these each quarter. The ACCC can compel refiners, importers, terminal operators, wholesalers and retailers to provide information relating to fuel prices where necessary.

“We expect that fuel retailers will pass on the cut in fuel excise to reduce the price at the bowser as soon as possible, as existing petrol stock levels are used up,” ACCC Chair Gina Cass-Gottlieb said.

“In light of today’s announcement, our petrol team will focus on this price monitoring work for the next six months to determine how retailers are passing through the excise reduction to consumers.”

“We will contact petrol retailers to set out our clear expectations that the savings are passed on to consumers and advise them that we will be monitoring their margins. We will also continue to inform consumers of retailer behaviour.”

“As these changes flow through to prices at local servos, this is a good time for consumers to look around and shop at those retailers who have already passed on the cut in the excise to their petrol prices,” Ms Cass-Gottlieb said.

The ACCC notes that the full excise has already been paid on existing stocks of fuel which will be run down first. This lag in the adjustment of wholesale prices is shorter in larger cities and sites with large turnover, but is often longer in regional locations where lower volumes of fuel are sold and fuel is replenished less frequently.

“If retailers make false or misleading statements to consumers that they have passed on the savings when they have not, the ACCC will not hesitate to take appropriate enforcement action,” Ms Cass-Gottlieb said.

“We encourage consumers in major capitals to also look at the price cycle information on our website, and consumers everywhere to use price comparison sites.”

It is important to remember that the major component of wholesale prices is the international price of petrol, which is largely influenced by the continuing fluctuations in international crude oil prices. The changes in the AUD/USD exchange rate also influences the petrol prices in Australia.

Any change in these factors would mean that the change in petrol prices may differ at certain times from the reduction in excise of 22cpl.

In its fuel monitoring reports, the ACCC reports on the components that make up retail petrol prices. In its December 2021 report, 50 per cent of the cost of petrol in the quarter in the five largest cities was made up of the international cost of refined petrol, 36% was made up of taxes (excise and GST) and 15 per cent was retail margin and other costs. We will be keeping an eye to these component costs in reporting on the pass through of savings, noting that increases in the international cost of refined petrol may mean that even if retailers pass on the savings, prices remain high or even increase. 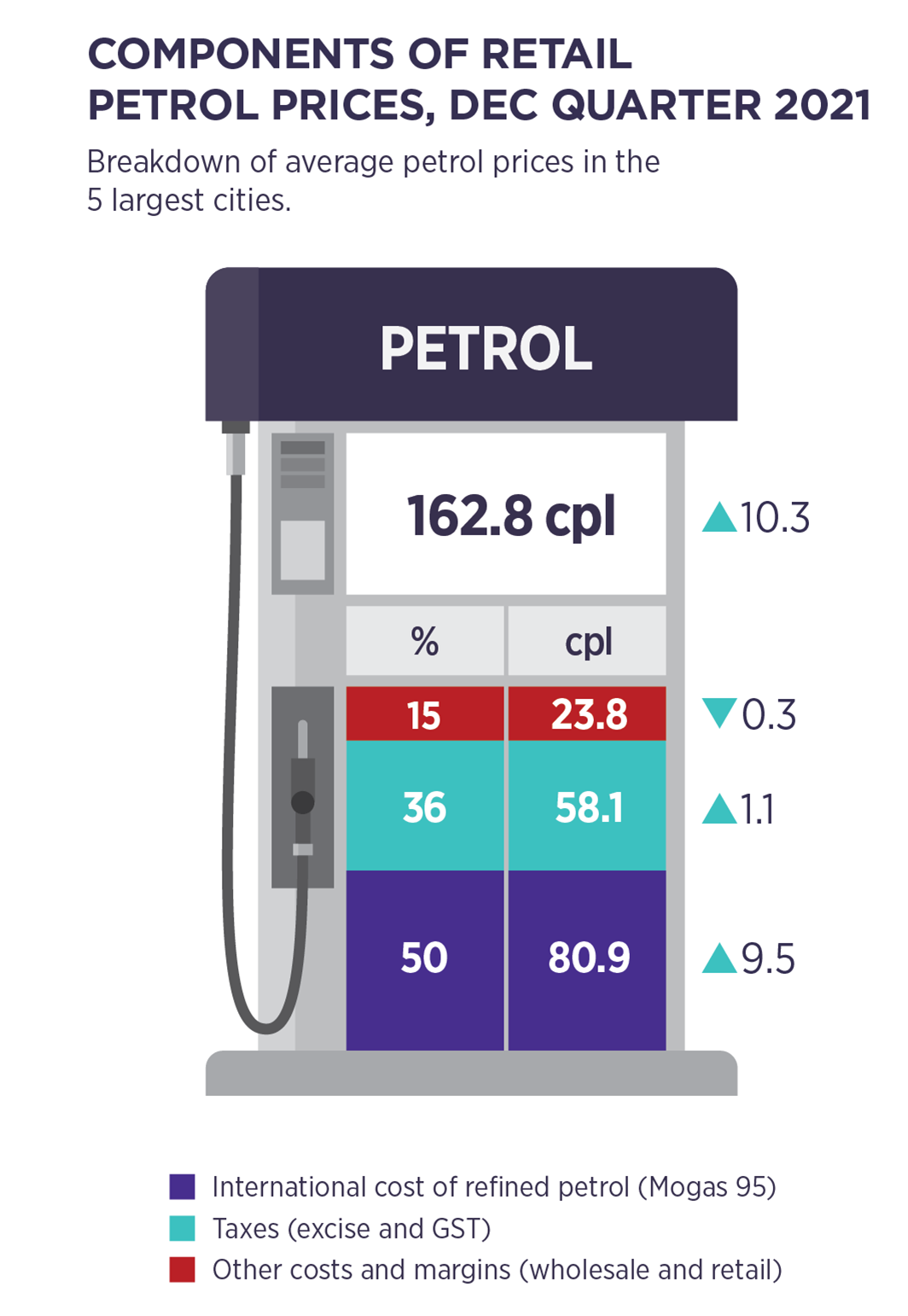 On 16 December 2019, the Treasurer issued a new Direction to the ACCC to monitor the prices, costs and profits relating to the supply of petroleum products in the petroleum industry in Australia and produce a report every quarter.