“The low petrol prices were due to two main influences: firstly, crude oil prices and international refined petrol prices in inflation adjusted terms fell to lows not seen since 2002 and 2008, respectively.”

“Secondly, gross retail margins decreased in the quarter. The ACCC believed that retail margins were unreasonably high in the second half of 2015 and wrote to the major petrol retailers in early February 2016 seeking an explanation for the high retail margins,” Mr Sims said.

The report notes that the reasons for increased margins identified by the companies included:

The ACCC will be further analysing these issues in coming months. 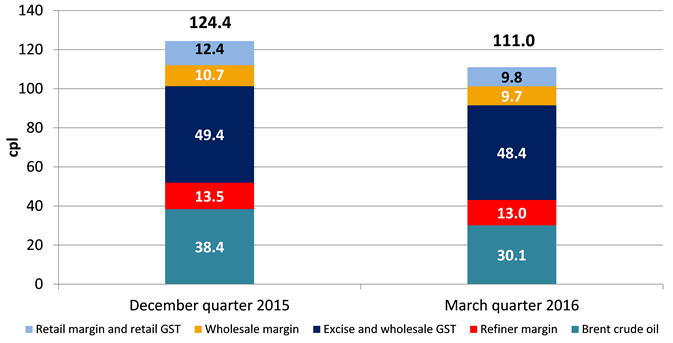 “The report also notes that a number of petrol price apps were released during the March quarter 2016 which will provide more information to consumers and help them find lower prices,” Mr Sims said.

Prices in Brisbane remain relatively high. In the March quarter 2016, the average petrol price in Brisbane was 114.8 cpl, which was 4.8 cpl higher than the average of the four other largest cities (110.0 cpl). The high relative retail prices in Brisbane are likely to reflect inadequate competition at the retail level. It is to be hoped that greater price transparency can affect the high petrol prices and profits in Brisbane over coming months.

Further details can be found in the key messages of the March quarter 2016 petrol monitoring report, which are at Attachment A.

On 9 December 2014 the then Minister for Small Business, the Hon Bruce Billson MP, directed the ACCC to monitor the prices, costs and profits relating to the supply of unleaded petroleum products and report at least quarterly for a period of three years.

The ACCC produces two types of reports under these arrangements:

Informed Sources operates a petrol price information exchange service which allows for subscribing petrol retailers to exchange prices on a near real-time basis. The ACCC was concerned that this arrangement allowed for the highly frequent and private exchange of information between petrol companies, which had the effect or likely effect of substantially lessening competition for the sale of petrol.

In December 2015 the ACCC’s Federal Court proceedings against Informed Sources and five petrol retailers (7-Eleven, BP, Caltex, Coles Express and Woolworths) were resolved by way of court-enforceable undertakings. As part of the resolution, Informed Sources made its price information available to consumers for free from 20 May 2016 on a near real-time basis at the same time as it is received by the five retailers. The pricing information is also available to third parties (including app developers and motoring and consumer organisations).