The Australian Competition and Consumer Commission (ACCC) has released its report into the Darwin petrol market.

In comparison with the five largest cities (i.e. Sydney, Melbourne, Brisbane, Adelaide and Perth), Darwin regular unleaded retail petrol prices in the two years 2012-13 to 2013-14 were around 10 cents per litre (cpl) higher than they had been over the previous decade.

“Given that petrol retail site profits in Darwin were already significant, it seems that motorists were paying around 10 cpl more than they should have been in a competitive market,” said ACCC Chairman Rod Sims.

“This had a significant impact on motorists in Darwin: the report indicates that the higher retail prices added around $9 million per year to their petrol bill.”

The high retail prices in Darwin were reflected in high profits. In 2013-14 (the latest financial year data available) the net profit per site (based on all fuel and convenience sales) in Darwin was around $1.2 million. This compares with Adelaide where average profits per site for most of the same companies in 2013-14 were between $100 000 to $200 000.

The high profitability of retail sites in Darwin during this time was mainly achieved through high margins on petrol sold.

“There were essentially two main reasons for the high prices and profits in Darwin,” said Mr Sims. “These were: the decrease in the number of independent retail sites, and weak retail competition.”

The number of independent retail petrol sites in Darwin decreased from ten to three between March 2007 and May 2015. As a result, the Darwin market became much more concentrated.

Mr Sims noted that: “while there were 39 retail sites in Darwin in May 2015, in recent times only four retailers (Puma Energy, Coles Express, Woolworths and United) set prices for 97 per cent of the petrol sold in Darwin.”

A significant change occurred in the Darwin petrol market in mid-2010 when Archer Capital became the major shareholder in Ausfuel, which was subsequently acquired by Puma Energy in March 2013. The relatively weak retail competition in Darwin was due in part to the presence of a large player (Ausfuel and then Puma Energy) that generally increased prices at its sites as a block.

“It appears that after Archer Capital became the major shareholder of Ausfuel in mid-2010 Ausfuel was most often the leader of petrol price increases in the Darwin market,” Mr Sims said.

“This pricing strategy was accommodated by the pricing behaviour of the supermarkets - Coles Express and Woolworths – who in general quickly followed price increases by Ausfuel and Puma Energy.”

“There is no clear leader of price discounting in the Darwin petrol market. Despite United’s strong presence in Darwin, it has generally not been the driver of lower retail prices as it has been in some other cities. The small number of independents in Darwin did not affect the behaviour of the major retailers.”

“This study provides some important insights into the level of competition required to ensure petrol markets work effectively in the interests of motorists. Clearly these four major players in the Darwin market, with the pricing behaviours that were observed, were insufficient to achieve such outcomes.”

“Since the October 2014 Northern Territory Fuel Summit, and the announcement of the ACCC’s market study in March 2015, retail pricing behaviour in Darwin changed,” Mr Sims said. Monthly average petrol prices in Darwin in June 2015 were 134.9 cpl, which was 5.7 cpl lower than in the five largest cities. This was the first time that monthly average Darwin prices were lower since the ACCC started to regularly collect Darwin prices in January 2000.

In October 2015 Darwin motorists paid on average just under 3 cpl more than motorists in the five largest cities.  This compares with an average difference of almost 20 cpl in 2013-14.

“This study shows the benefits of market studies and transparency. Although pricing to achieve very high margins is not against the law, it can be helpful in some circumstances for the ACCC to highlight where competition is inadequate. This is especially so where consumers are paying higher prices than they should be, particularly where significant public interest has been expressed,” Mr Sims said.

“There are several steps that could be taken to increase transparency and promote competition in the Darwin market”, Mr Sims said. “These include:

“It is important to watch retail prices in Darwin and to ask questions when the difference between Darwin and other locations (such as the average of the five largest cities) becomes relatively high for a period of time.” Mr Sims said.

“The publication of this report highlights the high profits achieved by petrol retailers in Darwin. As noted above, one of the steps to increase transparency and promote competition in the Darwin market is the regular publication of gross margins. It is hoped that the provision of the information in this report, as well as continuing transparency of profits and margins, may encourage new entrants into the Darwin retail market.”

In December 2014 the then Minister for Small Business gave the ACCC a new direction to monitor the prices, costs and profits of unleaded petroleum products in Australia for a period of three years. The new monitoring arrangements introduced by the ACCC include the preparation of regional market studies. These aim to explain why petrol prices are higher in certain regional locations and explain where profit is being made in the petrol supply chain.

The Darwin report is the first regional study conducted under the new petrol monitoring arrangements announced by the Government in December 2014. The ACCC is currently working on market studies in Launceston (announced on 8 May 2015) and Armidale (announced on 3 August 2015).

The ACCC collects retail petrol prices for all capital cities and over 190 regional locations across Australia. Following extensive assessment of price and other data for these locations, the ACCC announced in March 2015 that Darwin would be the first of its regional studies.

Adelaide was chosen as a comparator for Darwin because it is the smallest of the five largest capital cities. It has a population of around 1.1 million people and around 260 retail sites. As with Darwin, Adelaide does not have a refinery and is dependent on petrol being imported into the city.

The chart below shows the difference between annual average retail petrol prices in Darwin and those in the five largest cities. 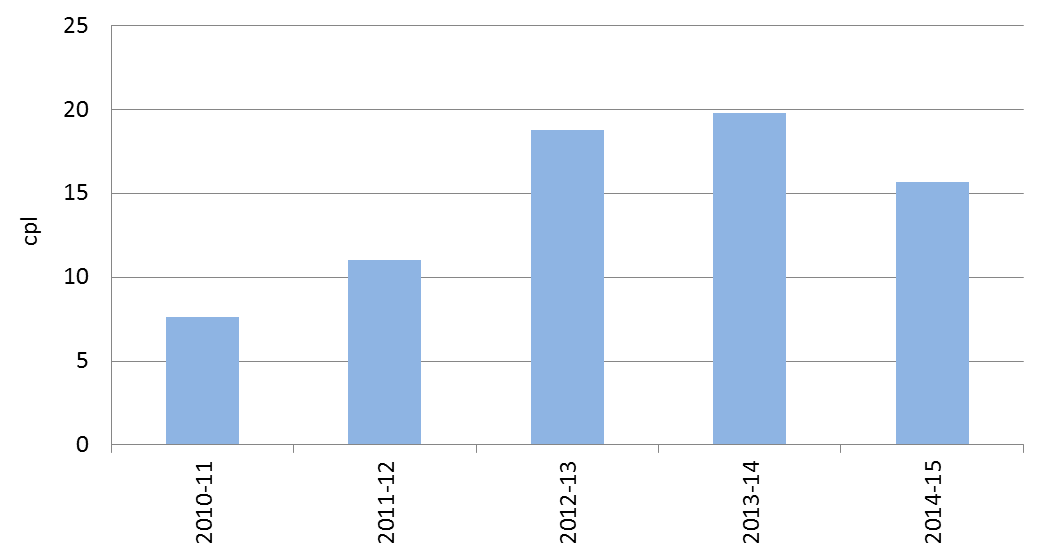 Source:   ACCC calculations based on FUELtrac and Informed Sources data.

The report is available here: Report on the Darwin petrol market