The Australian Competition and Consumer Commission has released its 2013 report on the prices, costs and profits of unleaded petrol in Australia.

In 2012-13, prices generally moved in line with the relevant international benchmark price (Singapore Mogas 95). International prices of crude oil and refined petrol have remained at historically high levels despite weak global economic conditions. The relatively high Australian dollar again provided some protection from higher international prices. Due to lower taxes on fuel compared with other countries, petrol prices in Australia are still among the lowest in the OECD.

“The report also highlights that smaller losses in refining and higher profits in retail were the main contributors to increased industry earnings,” Mr Sims said.

In 2012-13 net profits in the retail sector of the downstream petroleum industry increased to $535 million across all products and services, up 18.9 per cent on the previous year in real terms. Profits from convenience store sales were up 17.1 per cent in real terms to $205 million.

The release of the 2013 petrol monitoring report comes as the ACCC finalised its investigation into competition concerns in relation to shopper docket fuel discount schemes offered by the major supermarkets. The investigation resulted in the ACCC accepting enforceable Undertakings under section 87B of the Competition and Consumer Act 2010, from Coles Group Limited, Coles Supermarkets Australia Pty Limited, Eureka Operations Pty Ltd (Coles), and Woolworths Limited (Woolworths), that they would limit their ability to cross promote or cross subsidise petrol from their supermarket sales.[1]

The ACCC is also investigating whether price information sharing arrangements in relation to the retail petrol sector may be in breach of the Act. This investigation is nearing completion and it is anticipated it will be finalised in the coming months.

Price cycles in major metropolitan markets and relatively higher prices in regional centres continue to be a significant source of consumer concerns.

“The increased duration of price cycles and the unpredictability of the low-price day has added to the frustration of consumers, particularly those who take advantage of the low point in the cycle to purchase petrol,” Mr Sims said.

The ACCC’s 2013 Monitoring of the Australian petroleum industry report and summary is available on the ACCC’s website. The ACCC also provides regular updates and information on petrol on its website including on price cycles.

Profits in the Australian downstream petroleum industry across all products in 2012‑13 were $775 million or around 0.9 cents per litre. The profit result for the downstream industry for 2012‑13 represents a real increase of 85.6 per cent compared with the previous twelve months when profits were affected by significant losses in the refinery and total supply sectors.

In 2012‑13 Australian refineries recorded a net loss of $107 million after incurring a real net loss of $609 million in real terms the previous year.

In 2012‑13 net profits in the retail sector of the downstream petroleum industry increased to $535 million across all products and services, up 18.9 per cent on the previous year in real terms. Profits from convenience store sales were up 17.1 per cent in real terms to $205 million.

The Australian downstream petroleum industry is still in the process of undergoing fundamental changes:

The Australian refinery sector has undertaken significant rationalisation of its assets in the last ten years with vertically integrated petrol companies scaling back their involvement in refining. Mobil ceased operations at the Port Stanvac refinery in Adelaide in 2003 and formally closed it in 2009. Caltex has announced the closure of its Sydney refinery in 2014 while Shell has closed its refinery in Sydney and announced the sale of its refinery in Geelong and, in the event that a sale does not eventuate, close the refinery and turn it into an import terminal.

Rationalisation of the retail sector continues with On The Run seeking to acquire BP's retail network in South Australia.

The ACCC’s monitoring program focusses on the Australian downstream industry: total supply (refining and importing), wholesaling and retailing (figure 1). Consequently, the ACCC has not sought data from overseas suppliers of crude oil or refined product, domestic producers of crude oil or from minor wholesalers and retailers. 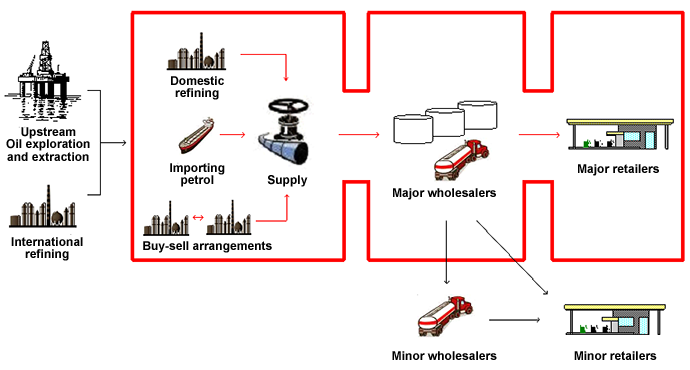 The following companies have provided information for the 2013 monitoring report: