Earlier this year, the ACCC announced disruption of relationship scams as a compliance and enforcement priority area.

The project proactively reaches out to community members that may be targeted by scammers. The ACCC has identified these possible victims by analysing international transaction data to detect patterns consistent with fraudulent activity.

“If you receive a letter from the ACCC warning you may be the target of a relationship scammer, please stop sending any money and contact us as soon as possible,” ACCC Deputy Chair Delia Rickard said.

“The ACCC will help you identify if you have fallen victim or are at risk. Our aim is to disrupt the scam and therefore remove victims from scammers’ insidious clutches. Our guidance is free and completely confidential.”

The ACCC’s 2013 Targeting Scams Report highlighted that relationship scams cause the most significant emotional and economic harm to victims.

“These scammers invest considerable time and effort deceiving you into a fake romance, a fraudulent business partnership or a complex investment scheme. Their ultimate aim is to build your trust so they can steal your personal details and money,” Ms Rickard said.

“Victims of relationship scams often don’t know they’re a victim until it’s too late and their money is gone forever.”

Raising awareness about how Australians can protect themselves is another important aspect of the project.

“People should be particularly vigilant in asking themselves who they are really dealing with when they meet the person online. Scammers use the internet to establish relationships behind a smoke screen, where they remain anonymous while connecting with potential victims around the globe,” Ms Rickard said.

“Alarm bells should go off if they request money, especially via wire transfer. This payment method is popular with scammers as it is almost impossible to trace and it is rare to recover money sent this way.”

“If you suspect that you, a friend or a family member is being targeted by a scammer, the ACCC strongly urges you to stop sending any money and to contact us.”

The ACCC is working with state and federal counterparts on the project through the Australasian Consumer Fraud Taskforce. The taskforce comprises of 23 government regulatory agencies and departments with responsibility for consumer protection regarding frauds and scams. Visit www.scamwatch.gov.au/scamdisrupt for the latest warnings on scams. 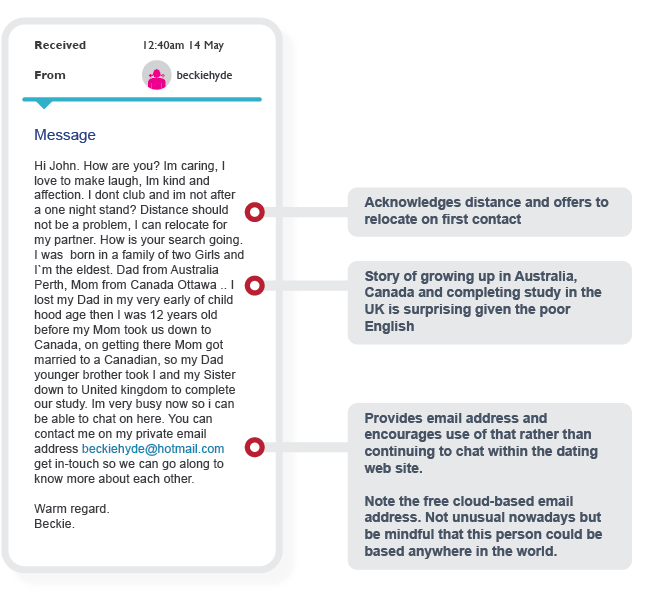