The Australian Competition and Consumer Commission (ACCC) has this week issued over 250 carbon tax removal substantiation notices to certain suppliers of regulated goods following the repeal of the carbon tax.

The notices have been issued to businesses that retail electricity and natural gas, produce electricity or bulk import synthetic greenhouse gases. These businesses are required to respond to the notice within 21 days after receipt by providing a written statement which explains how the repeal is affecting their prices, unless an extension is requested.

Each of these businesses is also required to provide the ACCC with a carbon tax removal substantiation statement by 18 August 2014 and to publish them on their websites until 30 June 2015.

Customers should expect to see the substantiation statements on the websites of these businesses after 18 August. If they are not there they should report it to the ACCC.

These are the first of the public statements by suppliers of regulated goods required under the Competition and Consumer Act 2010 (CCA). Electricity retailers, producers and natural gas retailers will also be required to issue customers with statements between 18 August and 15 September that show the average annual percentage or dollar savings attributable to the carbon tax repeal.

The ACCC will actively ensure compliance with these obligations and encourages consumers to contact it if relevant businesses are not making these statements.

If a recipient does not respond to a substantiation notice it could face a penalty of up to $34,000.

If a regulated supplier does not publish its substantiation statement the penalty for a breach is up to $85,000.

Failure to issue a customer statement may incur a penalty of up to $68,000.

Timeline of key requirements under the Act. 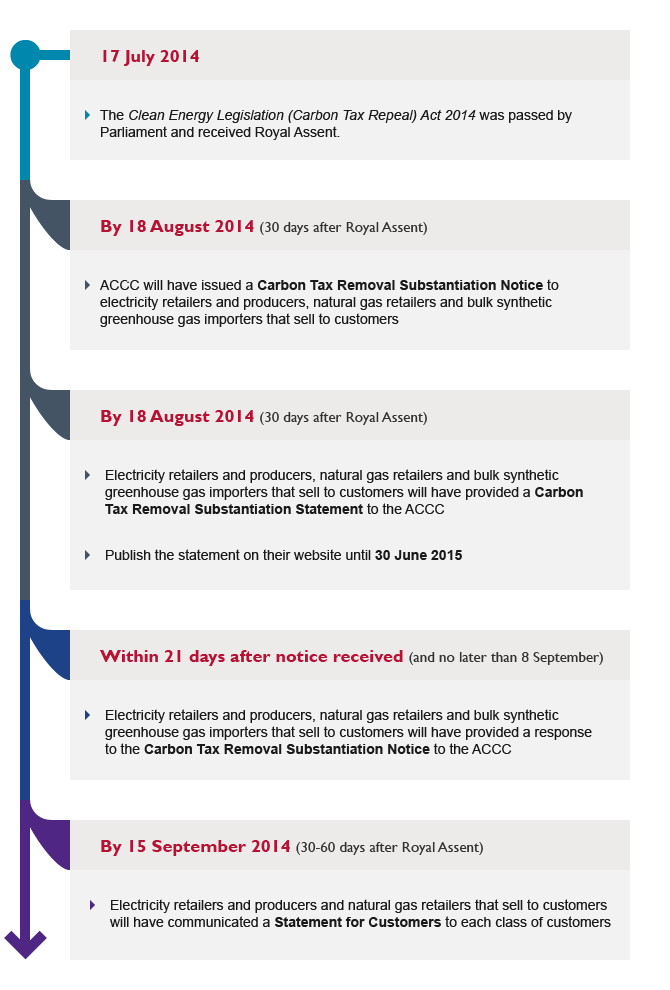