The ACCC secured nearly $170 million in penalties for breaches of competition and consumer law in the 2017-18 financial year, according to its latest annual report.

The regulator’s work spans a range of issues affecting consumers and small and large businesses across the economy, including product safety, infrastructure regulation, mergers, authorisations, agriculture, and inquiries into electricity affordability, the domestic gas market and competition in financial services.

The ACCC continued to advocate higher penalties for breaches of competition and consumer laws, and recorded its highest penalty in the Yazaki cartel case of $46 million.

The ACCC was also successful in securing penalties of around $10 million each against Telstra, Ford and Apple for consumer protection issues.

“We have been advocating hard for increased penalties for breaches of the Competition and Consumer Act to make boards and shareholders sit up and take notice,” ACCC Chair Rod Sims said.

“We will continue to seek higher penalties where we see consumer detriment or deliberate breaches of competition laws. This past year we’ve also welcomed the legislated increase to serious financial penalties available for breaching consumer law, bringing them in line to competition law penalties.” 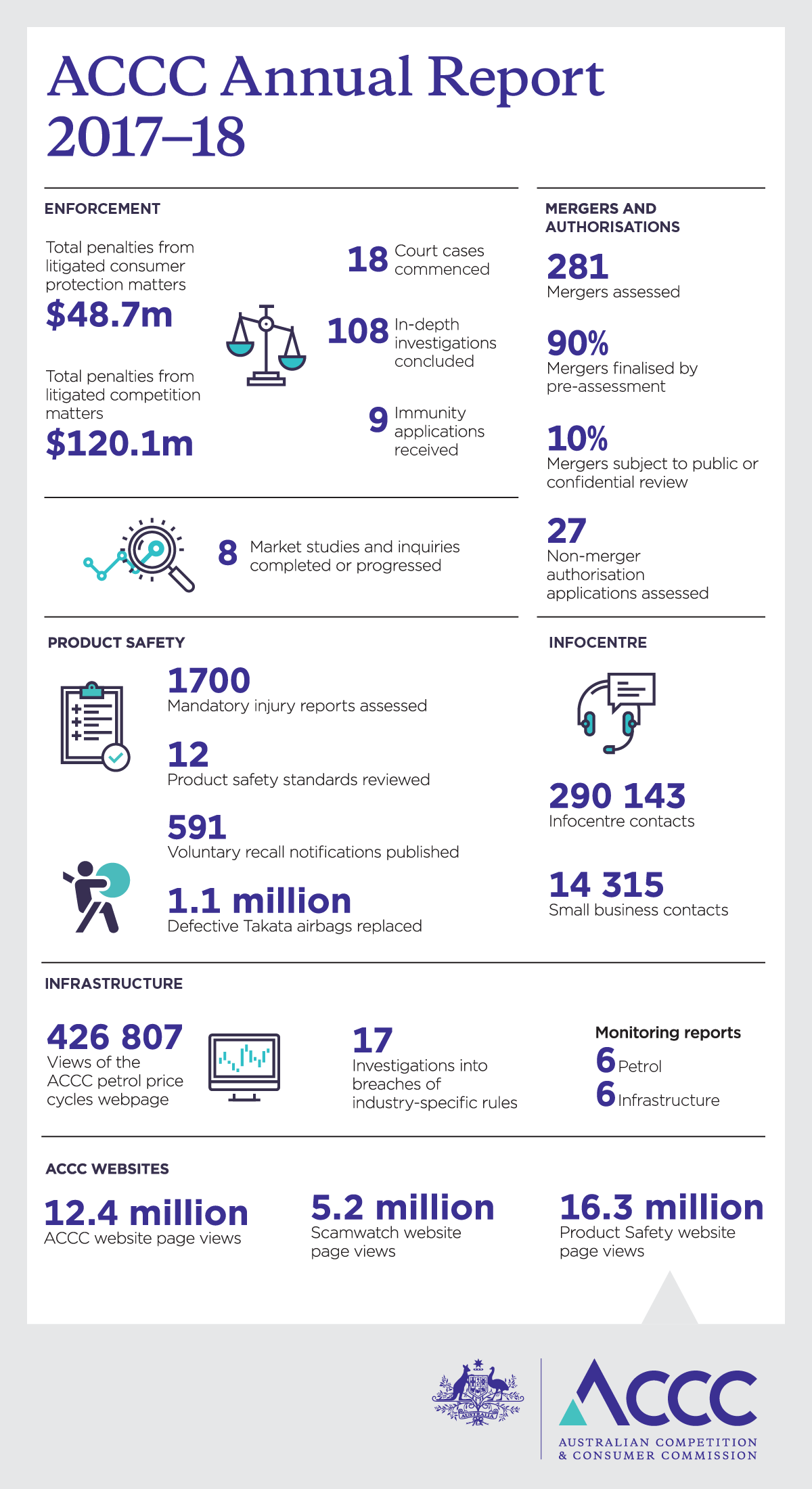 Some 281 mergers were assessed in 2017-18: 90 per cent were pre-assessed without the need for a public review. The remaining 10 per cent, some 29 merger matters, underwent a public or confidential review, with 17 unconditionally unopposed.

“While we endeavour to complete these merger reviews as quickly as possible, the focus is on getting the right decision to ensure long-term competitive benefits,” Mr Sims said.

Mr Sims also highlighted the ACCC’s work in the communications sector in 2017-18.

“In this last financial year, we took action on telcos’ misleading broadband speeds advertising and commenced our Measuring Broadband Australia program. Consumers are now getting much more accurate and transparent information about the speeds they can realistically expect from their internet, and which providers are delivering the fastest speeds,” Mr Sims said.

The ACCC also monitors and reports on sectors such as airports, stevedoring, petrol, wheat ports and water.

“The importance of a strong regulatory framework and resolute action by regulators to correct harmful conduct, protect consumers and provide confidence to the public is clear. The ACCC will continue to work hard to make markets work for the benefit of all Australians,” Mr Sims said.

A full copy of the ACCC Annual Report is available on our website.