The ACCC has instituted proceedings in the Federal Court against Facebook, Inc. and two of its subsidiaries for false, misleading or deceptive conduct when promoting Facebook’s Onavo Protect mobile app to Australian consumers.

The ACCC alleges that, between 1 February 2016 to October 2017, Facebook and its subsidiaries Facebook Israel Ltd and Onavo, Inc. misled Australian consumers by representing that the Onavo Protect app would keep users’ personal activity data private, protected and secret, and that the data would not be used for any purpose other than providing Onavo Protect’s products.

In fact, the ACCC alleges, Onavo Protect collected, aggregated and used significant amounts of users’ personal activity data for Facebook’s commercial benefit. This included details about Onavo Protect users’ internet and app activity, such as records of every app they accessed and the number of seconds each day they spent using those apps.

“Through Onavo Protect, Facebook was collecting and using the very detailed and valuable personal activity data of thousands of Australian consumers for its own commercial purposes, which we believe is completely contrary to the promise of protection, secrecy and privacy that was central to Facebook’s promotion of this app,” ACCC Chair Rod Sims said.

“Consumers often use VPN services because they care about their online privacy, and that is what this Facebook product claimed to offer. In fact, Onavo Protect channelled significant volumes of their personal activity data straight back to Facebook.”

“We believe that the conduct deprived Australian consumers of the opportunity to make an informed choice about the collection and use of their personal activity data by Facebook and Onavo,” Mr Sims said.

The Onavo Protect website stated that the app would “save, measure and protect” users’ mobile data, while advertisements on Facebook’s website and app included statements such as “Keep it secret. Keep it safe… Onavo Protect, from Facebook”.

The ACCC is seeking declarations and pecuniary penalties. 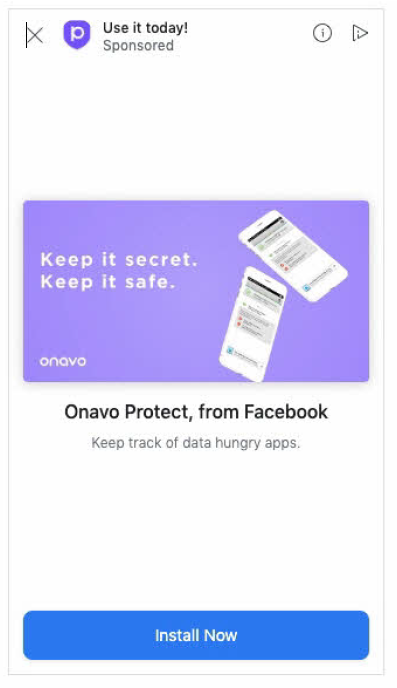 US-based Onavo, Inc. and Onavo Mobile Ltd, based in Israel, were mobile analytics companies that were acquired by Facebook in October 2013. After the acquisition Onavo Mobile became Facebook Israel Ltd.

Apple removed Onavo Protect from its App store in 2018 for non-compliance with its developer terms such as, among other things, collecting information about other apps installed on a user’s device for the purposes of analytics. It was later also removed from the Google Play store and was discontinued in 2019.

The ACCC’s Digital platforms inquiry final report examined a range of issues involving digital platforms and consumers, including concerns about Onavo Protect and how its users’ data was being collected and used.

In December 2020, in an unrelated action, the US Federal Trade Commission (US FTC) brought proceedings against Facebook, alleging that the company is illegally maintaining its personal social networking monopoly through a years-long course of anticompetitive conduct. The US FTC alleges that Facebook engaged in a systematic strategy including its 2012 acquisition of Instagram and 2014 acquisition of WhatsApp, and the imposition of anticompetitive conditions on software developers to eliminate threats to its monopoly. The court documents filed by the US FTC refer to Facebook’s use of Onavo Protect data to identify future acquisitions as part of the allegation that Facebook is illegally maintaining a monopoly.