The Australian Competition and Consumer Commission has accepted court enforceable undertakings from both Philip Morris Ltd (Philip Morris) and Zen Sensation Pty Ltd (Zen) not to supply cigarettes that do not meet the mandatory Reduced Fire Risk safety standard.

Philip Morris has also agreed to donate $300,000 to the NSW Rural Fire Service.

“Cigarettes sold in Australia must meet the mandatory safety standard to self-extinguish when left unattended. Before the Reduced Fire Risk Standard was adopted, discarded cigarettes and related products started over 4,500 fires and killed an average of 14 people each year,” ACCC Chairman Rod Sims said.

“In the bushfire-prone Australian environment, and with the significant risk of injury and damage from fires, all manufacturers and importers of cigarettes must have stringent internal controls in place to ensure that their products comply with the Reduced Fire Risk Standard.”

“Supplying products that do not comply with a mandatory safety standard is an offence under the Australian Consumer Law, and the ACCC will act swiftly to prevent harm to consumers,” Mr Sims said.

The undertakings can be found on the ACCC’s public register:

To meet the mandatory standard, cigarettes sold in Australia contain a concentric band of paper or other material, called the lowered permeability band, is included in, or applied to, cigarette paper in order to inhibit the burning of the cigarette.

The ACCC found that some batches of the Zen cigarettes passed and some failed. Zen also commenced a voluntary recall of the cigarettes it had supplied (TS Blue and TS Gold). 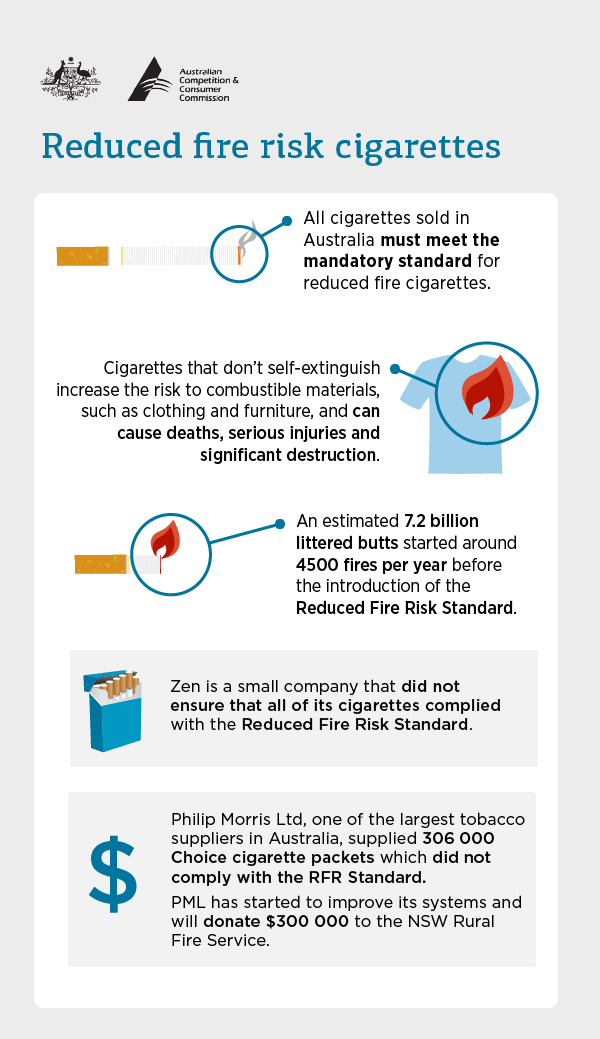