Conroys Pty Ltd (Conroys) has paid a penalty of $10,200 following the issue of an infringement notice by the Australian Competition and Consumer Commission .

The ACCC issued the infringement notice because it had reasonable grounds to believe that Conroys made a false or misleading representation about the place of origin of its Breakfast Bacon – 1kg (the Bacon Product) in contravention of the Australian Consumer Law (ACL).

In February 2015, Conroys supplied the Bacon Product labelled as a ‘Product of Australia’ when in fact it was produced using imported pig meat. The Bacon Product was supplied in a one-off shipment of 1020kg to a wholesaler in WA. 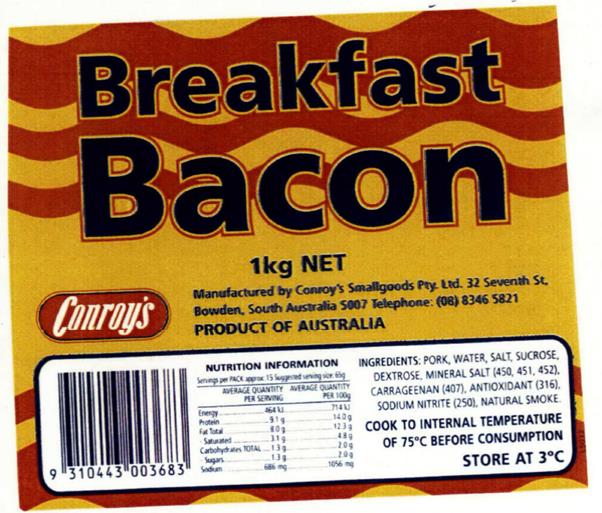 In addition to paying a penalty, Conroys has also provided a court enforceable undertaking to the ACCC that it will not represent that any of its products are the produce of Australia, unless:

Conroys has also undertaken to publish a corrective notice on its website and establish a competition and consumer compliance program.

“Many consumers have a preference for products that contain locally sourced ingredients and are often prepared to pay a premium for these products,” ACCC Chairman Rod Sims said.

“As it is often difficult for consumers to determine where products come from, it is crucial that businesses provide accurate information about the place of origin of the goods that they supply.”

“False claims of this kind not only mislead consumers but can also disadvantage competing suppliers, particularly those who source local ingredients for their products,” Mr Sims said.