Electricity prices have fallen almost 9 per cent since the middle of last year and there is $900 million in potential savings for households in eastern and southern states, new figures released today by the ACCC show.

Retail electricity offers now available to households in New South Wales, Victoria, South East Queensland, South Australia and the Australian Capital Territory are, on average, 8.8 per cent lower than they were in June 2020, which equates to an average annual household saving of $126.

Data from ACCC monitoring has revealed that if all customers in National Electricity Market regions were to have the advantage of the potential savings by switching to lower offers, or benefitting from retailers lowering the prices of their existing plans, the total annual savings would be about $900 million compared to June 2020.

But the ACCC is warning electricity retailers that the onus is on them to comply with new energy market laws, and pass on reductions in their costs to existing customers.

“There are two ways that households and small businesses can get the hip-pocket benefit of recent reductions in retailers’ costs: by changing to a new, cheaper plan; or, by waiting for their retailer to lower the rates on the plan that they’re already on,” ACCC Chair Rod Sims said.

“While we encourage consumers to cash in on the available savings by switching to a better deal, new laws require electricity retailers to pass on cuts in the wholesale cost of electricity.”

The new Prohibiting Energy Market Misconduct (PEMM) laws that came into effect in June 2020 require electricity retailers to make reasonable adjustments to their prices in line with their costs of procuring electricity. Companies that fail to comply with the laws face serious penalties, including fines of up to $10 million or 10 per cent of their turnover per breach.

“A significant increase in generation capacity, attributed to renewable generation and falling fuel costs, has led to much lower wholesale electricity costs and it’s vital that all Australians now see the savings,” Mr Sims said.

“Prior to this, we had a decade of sustained electricity price increases that placed unacceptable pressure on households and small businesses.”

“The ACCC is now investigating whether electricity retailers’ current prices, including to their existing customers, are in line with recent wholesale price reductions, and if electricity retailers haven’t passed on the savings to consumers as required by law, they can expect to hear from us,” Mr Sims said.

“We also expect further significant price reductions from retailers over time, as the reductions in wholesale spot prices flow through to retailers’ contracting positions.”

The ACCC has already approached a number of electricity retailers who may not have adequately passed on cost savings to their customers, and will be closely monitoring the behaviour of many others in the electricity market over the coming months.

Retailers’ wholesale and network costs make up most of a consumer’s electricity bill, and wholesale spot market prices have decreased significantly in all National Electricity Market regions in 2020-21.

“Spot prices have been significantly lower for a year now, so retailers should be experiencing significant reductions in their costs already,” Mr Sims said. 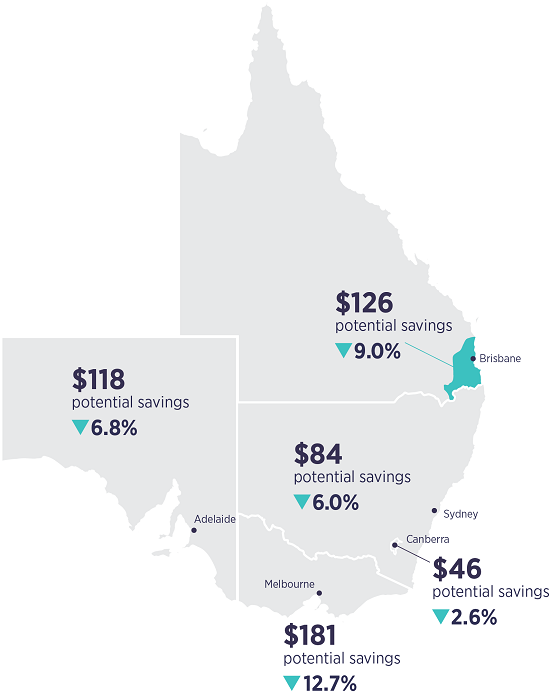 In Victoria, flat rate offer prices have reduced by 11.1 per cent to 14.2 per cent, and a typical household on a flat rate offer should save between $171 and $198 a year.

In New South Wales, flat rate offer prices have reduced by 4.7 per cent to 6.9 per cent, and a typical household on a flat rate offer should save between $80 and $88 a year.

“While the ACCC will be enforcing the new laws, we also urge people who haven’t seen their bill come down to contact their electricity retailer and ask to be put on the best offer for their circumstances,” Mr Sims said.

“Many consumers will be able to achieve further savings by comparing advertised prices and shopping around.”

On 25 November 2019, Parliament passed the Treasury Laws Amendment (Prohibiting Energy Market Misconduct) Bill 2019, which introduced three new electricity-sector specific prohibitions on certain conduct in electricity markets into the Competition and Consumer Act 2010. This included the ‘retail pricing’ prohibition which is directed at electricity retailers making reasonable adjustments to prices when there are sustained and substantial reductions in their underlying costs of procuring electricity. These provisions came into effect on 10 June 2020.

Retailers who fail to comply with the new laws face fines of $10 million per breach, or three times the value of the benefit received, or if the benefit cannot be calculated, 10 per cent of annual turnover in the preceding 12 months.

Consumers can speak directly to their retailer or use government comparison websites to find a better deal. Consumers in New South Wales, South East Queensland, South Australia, Tasmania and the Australian Capital Territory can use Energy Made Easy to compare offers. Victorian consumers can use Victorian Energy Compare.

Clarification:  This media release was amended on 13 April 2021 to correctly refer to the National Electricity Market (not National Energy Market) throughout.