The Australian Competition and Consumer Commission’s latest report on the Australian petroleum industry shows that average petrol prices in 2015–16 were at their lowest levels since 2002. However, gross retail margins also increased to their highest levels, indicating that the full benefits of lower international crude oil and refined petrol prices are not being passed on to motorists.

The average price for petrol in the five largest cities (i.e. Sydney, Melbourne, Brisbane, Adelaide and Perth) in 2015–16 was 121.7 cents per litre (cpl). This was the lowest annual average since 2001–02 in real terms (adjusted for inflation). Gross retail margins, the difference between retail prices and published wholesale prices, in the five largest cities increased by 1.2 cpl on the previous quarter, and averaged 11.2 cpl in 2015–16, the highest level since the ACCC began monitoring them in 2002.

“Bowser prices for motorists last year were the lowest they’ve been on average for 14 years, but this report suggests that in order for there to be more competitive pressure on retailers, consumers need to shop around and reward those offering the best-priced fuel.”

Since 20 May 2016, motorists have been able to access near real‑time petrol price information through the MotorMouth smartphone app, which is one of a number of fuel price apps currently available to consumers. This is a result of court enforceable undertakings received by the ACCC in December 2015 from data provider Informed Sources and four major petrol retailers to make public information previously only available to them.

“Some motorists have been quick to take advantage of these petrol price apps and are already using them to ensure they are getting the best price when they fill up. This improved price transparency puts pressure on retailers to offer competitive prices or risk customers driving to a petrol station that does,” Mr Sims said.

“We encourage people who are concerned about petrol prices to take advantage of these apps. Motorists have the ability to drive competition in the fuel sector literally in their hands.”

“We know that price competition works to bring down retail margins. We have seen this in Launceston, where prices and margins have been lower following discount schemes and better price transparency,” Mr Sims said.

The ACCC’s quarterly report found that petrol prices in the five largest cities in the June quarter 2016 were 118.0 cpl, an increase of 7.0 cpl from the previous quarter.

Since 2014 the ACCC has collected retail petrol prices for all capital cities and over 190 regional locations across Australia. 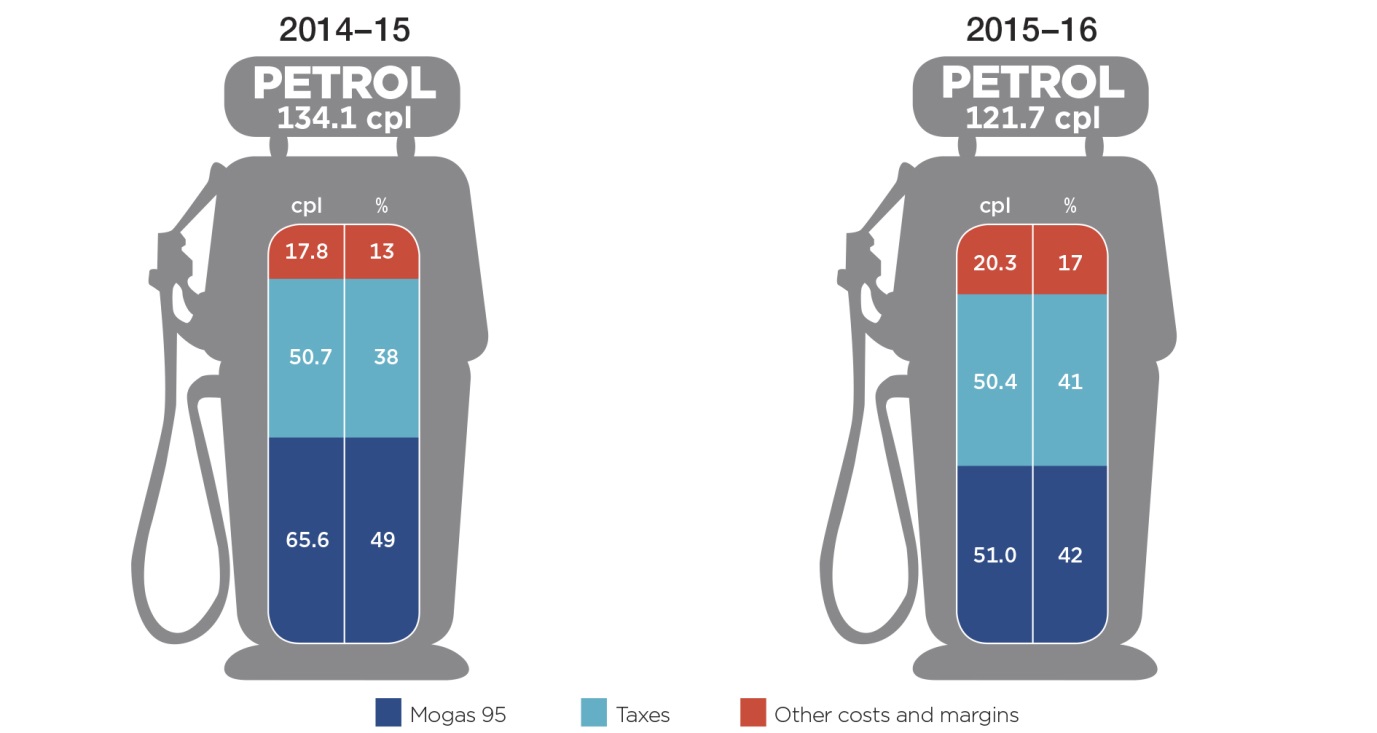 The figures above show the components of Australian petrol prices in the five largest cities in 2014–15 and 2015–16. In 2015–16 the relative contribution of ‘other costs and margins’ (which includes both retail and wholesale costs and margins) increased to 17 per cent of the average retail petrol price. While the international price of refined petrol (Mogas 95) remained the largest contributor to the average bowser price, its relative contribution decreased to 42 per cent in 2015–16.

Other findings of the report

Following the ACCC report into the Darwin petrol market, petrol prices in Darwin have been relatively low. In the June quarter 2016 prices in Darwin were 2.0 cpl lower than those across the five largest cities. This is the lowest quarterly average Darwin price relative to the five largest cities since the March quarter 2000 (the earliest date for which the ACCC has data).